Jeff Melman
Day Damn One is the 14th episode of Season 1 of The Fresh Prince Of Bel-Air.

Ashley and her friends ask Will to tell a scary story at their slumber party before they go to sleep. Will tells the tale of his first day at Bel-Air Academy. After being enrolled at Bel-Air Academy, Will felt a sense of culture shock in a place that was not only different from his society back in Philadelphia, it also imposed more rules and boundaries, such as tougher classes, having to wear a jacket and tie, and single-sex education. Neither is Will impressed with the history of the school, looking at past athletic trophies and academic competition awards and saying "Man y'all don't throw nothing away!" Carlton shows Will a desk inscribed with the first four men who graduated from Bel-Air Academy. Despite feeling alone, Will manages to make a few friends, as well as getting to know a white English teacher who admires the works of Langston Hughes.

Will manages to get through the first day, then is by himself in the common area. He imagines himself as a famous alumnus, and thinks he should "make his mark on the school" by carving his name on the desk. At home, Carlton reports the vandalism, saying someone carved "FRESH" into the desk. Will does not confirm nor deny knowing anything, until the "Fresh Prince" remark is made, causing Uncle Phil to grumble "Day Damn One, Will!" Both Uncle Phil and Carlton say Will must do the right thing and tell the school administration of what he did. Will scoffs it off by saying that would be outright stupid. However, the following day at school, Will has an awful day and cannot concentrate. A teacher says "Fingerprinting shows that Will Smith did it!" and aims a rifle at Will, who screams in horror. However, that was only imaginary, as Will was haunted by his conscience. In reality, the teacher was teaching and wraps up class to casually addresses the vandalism, Will is thinking to himself whether or not to confess. Before a decision is made, Carlton tells the teacher what Will did. This angers Will, who says Carlton has been annoyed that Will has made his own friends. Carlton says that he was also bound to do the right thing, as he knew about the violation. According to school rules, withholding such information is called toleration and also grounds for disciplinary measures.

At Will's disciplinary hearing, the board recommends Will be dismissed from Bel-Air Academy. Uncle Phil and Carlton look angered with it, believing that while Will was in the wrong, such a punishment is too severe for someone so unacclimated to prep school. Will is conflicted in the decision. He did not like the school, but maybe he acted out before giving the place a chance. Will also thinks an expulsion would be horrible for his academic reputation, no matter where he tends to his education. A throng of students protest the disciplinary committee's action, led by the English teacher, who says the school cannot hold Will to their standards immediately, given that he came from Philadelphia and has yet to assimilate Bel-Air ways. The expulsion recommendation is disapproved. However, Will did run up a big bill with the school in getting refurbishes to undo the damage to the desk. Instead of dismissal, Will will be made to pay off the debt the poor man's way; through grunt manual labor after school. When Geoffrey hears of this, he struggles to keep his composure in front of Will, but then laughs uproariously out of his sight.

Will finishes his story to the girls, who then decide to have a pillow fight with him. 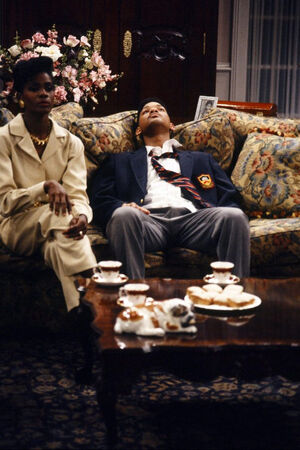 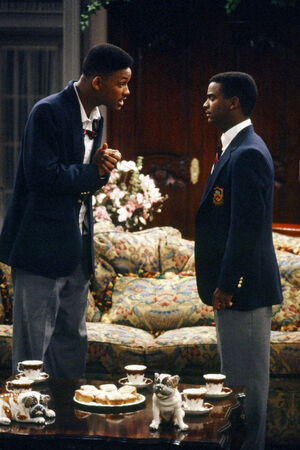