Not with My Pig, You Don't is the 4th episode of Season 1 of The Fresh Prince of Bel-Air.

A visit from Grandma and Grandpa Banks (Virginia Capers, Gilbert Lewis) enables Will to liven up Uncle Philip's dull image for a reporter profiling the community leader.

The family is in the living room at night wandering when Philip is coming home. They begin to worrying, as he is late but Vivian tells them to remain calm and not jump to conclusions. Will, who is busy reading a magazine, loudly interrupts and mentions Bill Cosby having a street-wise niece appearing on his show. Philip then walks in, with a relieved Ashley walking up to him for a hug. Philip apologizes for not calling, as he wanted to rush home and tell everyone the great news. The community leaders will be presenting to him the Urban Spirit Award due him helping their brothers and sisters on the streets. He then reveals to them that a reporter will be arriving to interview him, therefore he asks for everyone to look their best for the interview and the awards banquet. Vivian asks him if he called his parents. He says they are taking the next flight to California, which excites Ashley.

In the kitchen, Will and Ashley are dancing to the radio, when afterwards, Phillip's parents, Hattie and Joe Banks, walk in the door. Ashley runs up to them and gives them a nice warm hug, along with Hilary and Carlton. Ashley then introduces Will to them. Will, having been previously told that his uncle is from Baltimore, asks them how their flight from there was but she tells him that Zeke (Philip's old name) was born and raised on a farm in North Carolina, then moved to Baltimore when he was 16 years old. Will becomes humored after hearing all of this. Philip and Vivian then walk in and hug Hattie and Joe. The family then heads into the living room. Hattie calls for Geoffrey and gives him a list of groceries she'll be needing for supper. After telling everyone what she is cooking, Will begins to taste it already and gives Hattie a hug. The family then offers Hattie and Joe a look at their swimming pool. Hattie then tells everyone a story about how Zeke always loved their swimming hole back home and played in it with his pet pig named Melvin. Eager to learn more, Will walks back into the kitchen with Hattie.

That night, Hattie is in the kitchen singing Wade in the Water. Will, who happens to be up way past curfew, tries to sneak in behind her but is blind-fully caught by Hattie. Will begs her to not tell his uncle, telling her he was just a little bit past his curfew. She tells him to not do it again. Will then asks her why's she up. She tells him she had to get up and get breakfast started. She then offers Will a game of cards. As the two play, Hattie shares stories about his uncle's childhood. She tells him about his success as the first black president of the Young Farmers of America. She takes him back to the time when there were only white restrooms and shares a little story of how Zeke drunk too much lemonade and how he decided to stand his ground against the whites.

The next day, Will is out with Phillip's parents at Disneyland, while the family is preparing for the interview by going over what each person is to say. A reporter Named Melissa Klein walks in and the interview promptly begins. After that, Will returns home with Phillip's parents. Looking at the time, Hattie and Joe decide to go to bed. Afterwards, the reporter walks in and gets on the phone. She decides to kill the story about Philip, saying his life dull. Will, who overheard the conversation, assures her that his uncle is much more than what she thinks. He tells her the stories about Philip's past "barnyard life" he heard from Hattie.

Once the story is printed in the newspaper, a stack of them are ordered by Philip. Geoffrey and Vivian look at them and are bewildered by how they got a hold of the pig stories. Philip then comes into the kitchen, eager to look at the paper. Geoffrey reluctantly begins reading the headline, then stops. Philips takes the paper and reads it for himself. As he reads down the page, he realizes they printed the stories of his real childhood and his pet pig in the paper. Will then walks in with a stack of newspapers. After asking who is responsible for this, Will tattles on himself. Vivian and Geoffrey leave, telling Will to run. Confused, Will asks what he did wrong. As Philip begins to scold Will for his stunt but Hattie walks in and hears him talk down about his childhood. An upset Hattie reminds her son of how good he had it back then, despite not having much and that he has nothing to be ashamed of. He explains to her that he isn't ashamed but is just trying to project the perfect image for his associates. Hattie, believes that counts as being ashamed, then leaves the room with a crushed heart.

Later that night, the family appears at the awards banquet. Hattie refuses to talk at all but Will tries to get her to forgive her son. She also refuses to eat any of the food offered at the banquet but rather just fade into the background by serving up her own food, which she brought in her bag. In an attempt to get her to forgive her son, Will reminds her of how much her son likes her famous casserole but this fails. He then tries again by saying aloud how Philip is so glad to have his loving parents there with him but Hattie fails to see that he thinks highly of them. Philip then goes to the restroom to be alone for a few minutes. Will follows him there and apologizes for messing up his image but tells him that the reporter would've trashed the article if he didn't give her the pig stories. Philip then explains to Will how good he had it, how his parents loved him so much and how hard they have worked to make sure he'd get everything they never had. He then starts worrying that his mother may never forgive him but Will assures him that as long as he explains it to her, she'll understand. Philip is then called up to give his acceptance speech. Philip begins with growing up in Baltimore, then mentions how he was born in North Carolina. Upon hearing his speech, Hattie and Joe take each other's hands and begin to smile, as Philip shows renewed pride in his roots. 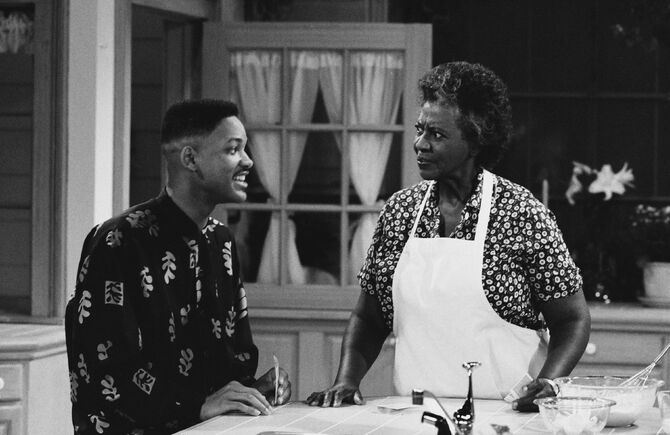 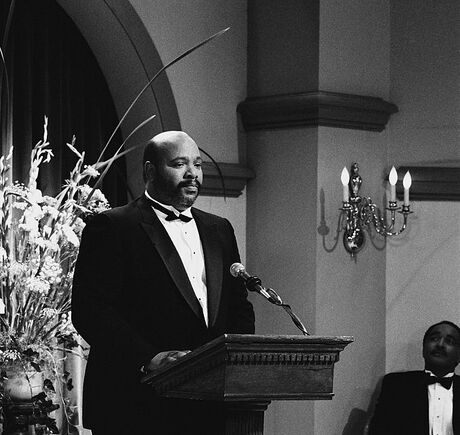