Papa's Got a Brand New Excuse

Shelley Jensen
Papa's Got A Brand New Excuse is the 24th episode of Season 4. It originally aired on May 9, 1994. It was written by David Zuckerman and Bill Boulware, and directed by Shelley Jensen.

While working at the Los Angeles University student restaurant, Will recognizes a customer - his father - whom he has not seen for 14 years. His father, who had left him years before, claims he is finally ready to become a part of Will's life, again. While Will is forgiving and understanding, Phillip and Vivian not so much. And it turns out, the reconciliation between father and son was all too good to be true.

Will is at the Peacock when he sees a man staring at him. The man turns out to be Will's father, Lou Smith, whom Will hasn't seen in 14 years, since he abandoned the family. The two awkwardly find themselves talking with Lou claiming he's a self-employed truck triver now, and that he recently spoke to Will's mother, who informed him that Will was now in Bel-Air, so he drove down to see his son.

The two later return to the Banks mansion, where Vivian is less than happy to see Lou, but maintains a civil presence around him for Will's sake. Vivian and Carlton are excited to see their Uncle Lou, and Ashley (who was a baby when Lou walked out) and baby Nicky get to meet him for the first time. Phillip however, is downright hostile towards him, questioning him what possessed him to suddenly return, and why he isn't sending them any money to his wife and child, when he's clearly making some, driving a truck.

At a carnival Lou tells Will that the real reason that he abandoned him was because he was scared of having a kid. Will forgives him and wants to give him another chance. The two are prepared to take a cross-country trip around the country for the remainder of the summer, but Philip sees that this reunion and trip is in Lou's favor rather than Will's. Will and Philip subsequently get into a heated argument over this, with Will claiming in anger that he doesn't care what Phillip thinks because Phillip not his father, leaving Phillip visibly upset and at a loss for words.

Vivian helps Phillip realize that he is being selfish to Will, due to his hatred for Lou, and Phillip and both Will apologize for their behavior. Will assures Phillip he's grateful for everything Phillip has done for him, but he still needs to give his father a chance, if he's truly changed. However, Lou announces to Vivian and Phillip that he has to leave immediately to make a business shipment, and he's gotta be open for more shipments, so the trip he promised Will isn't going to happen. When they express how this is going to crush Will, Lou asks Phillip and Vivian to break the news to Will. Phillip asks Vivian to allow him to talk to Lou in private, and Vivian agrees, on the condition that he doesn't hit Lou... because she wouldn't want to miss that. She then exits, but not without warning Lou that if he walks out now, he will not be welcome at the Banks mansion again.

Lou and Phillip get into a heated argument about Lou's responsibilities as a father, with Lou again claiming he was scared to be a father, which Phillip rejects, claiming he too was scared to be a father, but unlike Lou, he didn't run out on his family, but rather remained present for his children's lives, as a good man does. Lou exclaims that Phillip is a better man than himself, thinking that's what Phillip wants to hear, and asks him to break the news to Will, but Phillip refuses, and Lou opts to duck out and call from the road.

Before he can do so, Will walks in, packed and ready to go. Lou awkwardly admits that he's got to take care of some business so the planned trip is going to have to wait a week or so, and promises to call to work it out. Will seemingly understands, but he realizes that Lou's just trying to weasel his way out of the situation, and their trip isn't going to happen at all. Lou claims it was great to see Will again, and Will responds "You too... Lou" instead of Dad, officially disowning Lou as his father. Lou seems hurt by this, but can't think of anything else to say, and he walks out without another word.

At first Will seems okay with Lou abandoning him, as at least he said goodbye, but Will now wishes he hadn't spent money on a present for Lou. Will then launches into an emotional rant about how he learned to do things growing up without Lou and how he will continue to live his life and be successful without Lou, including being a better father than Lou was, and Lou especially can't teach him anything about how to be a father. Will then begins to cry and asks Phillip why his father doesn't want him. He and Uncle Phil embrace each other crying, as the camera zooms in on Will's present: a statue of an African father holding his young son.

Will: Hilary, this is my father...
Hilary: (laughing) No, Will's father is a deadbeat who left Will and his mom flat!
Lou: Hello.
Hilary: Uncle Lou!!! (hugs him)

Philip: If you'll excuse me, I think I'll skip dinner. I don't have much of an appetite.
Geoffery: Shall I call 911?

Will: Hey, Uncle Phil, that is not cool, man, the way you dissin' my father like that.
Philip: The hell with your father!
Vivian: Philip, for God's sake...
Philip: He waltzes in here after 15 years!?
Will: 14!
Philip: Oh, excuse me. 14 years ... and acts like nothing has happened. Wake up, Will. This is the same guy who didn't think enough of you to pick up the damn phone!
Will: He made a mistake. I'm sorry that everybody can't be as perfect as you, Uncle Phil. But if I can forgive him, how come you can't?
Philip: Because he's not doing this for you. He's doing this for himself and if you think any differently, then you're a fool!
Vivian: Hey, hey, just cool it. Just cool down. We can talk about this another time.
Will: You know what, Aunt Viv? Ain't even nothin' to talk about. I've been waiting for this a long time, my whole life and ain't nobody going to stop me. Come tomorrow, or I'm outta here.
Philip: Oh, yeah? I don't think so.
Will: Who cares what you think? YOU'RE NOT MY FATHER!

Philip: Carlton, am I a good father?
Carlton: Yes, you're the best! Now can I have early access to my trust fund?
Philip: Not a chance.
Carlton: I HATE YOU!
Philip: Oh, yeah? Well, TAKE A NUMBER!

Vivian: Philip, stop moping. You know Will didn't mean any of that stuff he said.
Philip: Yeah, then why did he say it? For four years, I treated that boy like my own son. Whatever he needed, whether it was a pat on the head or a kick in the pants, I was there for him. I worked my ass off trying to keep him in line!
Geoffrey: And yet it's come back with a vengeance.

Phillip: Vivian, could you take Nicky upstairs?
Vivian: You're not going to hit him, are you? Because I wouldn't want to miss that.
Vivian: Lou, if you walk out of Will's life now, don't you ever come back.
Philip: Sit down.
Lou: I ain't got time for no lecture.
Philip: I said sit down, Lou!
(Lou sits down)
Philip: You know, Will was doing just fine until you showed up. But now that you're back, you have responsibilities to him.
Lou: Hey, look, we're still gonna take the trip...
Philip: Oh, bull! BULL!!! Will is not a coat that you hang in the closet, then pick it up when you're ready to wear it. His life goes on. He's not supposed to be here for you! You're supposed to be here for him!
Lou: You get off my back! You think I want this?! IT JUST HAPPENED!!! Now, when Will was a baby, I was scared...
Philip: CUT THE CRAP, ALL RIGHT?! CUT IT! 'Cause I've been there! But I didn't run out on my family. I was there every day for them, because that's what a man does.
Lou: Fine, Philip! You win. You the man. You a better man than me. You happy? Now, are you gonna tell Will or not?
Philip: I'm not gonna do your dirty work for you.
Lou: Fine. I'll call him from the road.
Philip: Yeah, why don't you do that?
Lou: Yeah, I'll do that.
(Will enters)
Will: Daddy-o! Whazzup?
Lou: Will, man I'm glad you're here. Some business came up I gotta have, so we're gonna have to put our trip on hold. You understand, right?
Will: Yeah, yeah, that's cool.
Lou: Just for a couple weeks.
Will: Mmhm, I understand.
Lou: Maybe a little longer.
Will: Yeah, whatever, whatever.
Lou: Look, I'll call you next week and we'll iron out the details, okay?
Will: Yeah, yeah.
Lou: It was great seeing you, son.
Will: You too, Lou.
Lou: Yeah, um…

Philip: I'm sorry, Will.
Will: You know what? Actually, this works out better for me. You know, the slimmies this summer come to class wearing next to nothing, you know what I'm saying?
Philip: Will, it's all right to be angry.
Will: Hey, why should I be mad? I'm saying, at least he said good-bye this time. I just wish I hadn't wasted my money buying this stupid present!
Philip: I-I'm sorry. If there was something that I...
Will: Hey, you know what? You ain't got to do nothing, not now, Uncle Phil. You know, it ain't like I'm still 5 years old, you know? It ain't like I'm gonna be sitting up every night asking my mom, "When's Daddy coming home?", you know? Who needs him? Hey, he wasn't there to teach me how to shoot my first basket, but I learned, didn't I? And I got pretty damn good at it, too, didn't I, Uncle Phil?
Philip: Yeah, you did!
Will: Got through my first date without him, right? I learned how to drive, I learned how to shave, I learned how to fight without him, I had 14! Great birthdays without him; he never even sent me a damn card! TO HELL WITH HIM!!! (pauses) I didn't need him then, I don't need him now.
Philip: Will...
Will: No, you know what, Uncle Phil? I'ma get through college without him, I'ma get a great job without him, I'ma marry me a beautiful honey, and I'ma have me a whole bunch of kids. I'ma be a better father than he ever was, and I sure as hell don't need him for that, 'cause there ain't a damn thing he could ever teach me about how to love my kids! (long pause) How come he don't want me, man?! 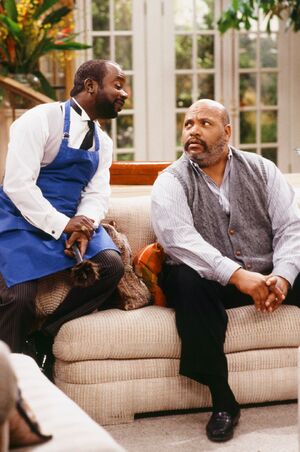 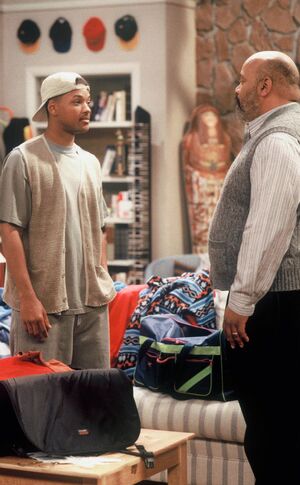