The Fresh Prince Of Bel-Air
Register
Don't have an account?
Sign In
Advertisement
in: Characters, Main Characters

“You are my son, Will. End of story”
—Philip Banks

Philip Banks is the overall tritagonist as well as the main antagonist of The Fresh Prince Of Bel-Air. He is portrayed by James Avery.

Philip is the father of Hilary Banks, Carlton Banks, Ashley Banks, and Nicky Banks, the uncle of Will Smith, and the husband of Vivian Banks. Throughout most of the series, he is depicted as a very strict, commanding, orderly, and lawful man. Being the patriarch of the Banks' household, he is seen to be very caring towards his children. However, while he is caring, he is undeniably very strict with his children, holding his children up to very high standards, and is seen to be disappointed with them when they do not live up to these expectations. Philip also often loses his temper fairly quickly, openly lashing out when he is angered. This much is attested by Vivian, whom is usually seen to be the only person that can make Phillip relaxed when he loses his cool. While he is a very strict man, he is undeniably a great father and husband.

Even though Phillip tends to lose his temper fairly quickly - especially when demeaning his children for their wrongdoings, he means well deep down, and he loves and cares deeply about his family. Philip also loves food and had a pet pig when he remained young. According to Hattie Banks, in his childhood, he was a very protective of his mother and his father (who is currently deceased.) Currently, he works as a Judge, and senior partner at Furth, Wynn, and Meyer's. He also used to be a lawyer. He can be very cheap, but he does let it slide when he lets his daughter Hilary shops, even though it bothers and aggravates him. Philip is also a very lawful man, who has defined himself as an activists first and foremost, who strives to maintain equality for everyone. This is seen through his very orderly and demanding demeanour, and it is also because of this that he has little tolerance for Will's hardheaded attitude and rebellious ways. He has also had a history with the Civil Rights movement, which he undeniably takes pride in.

Philip is also portrayed as a very strong person. Shortly after Will arrives, he mocks Uncle Phil, calling him "soft" because of his disdain towards Will's jokester sort-of attitude. As a response, Philip calls Will out on having Malcolm X posters when the latter saw and heard the man himself speak, a notion that seemed to surprise and impress Will. An example of this is when a fellow activist calls him out of being "a sellout" for "working with the system." Philip, as a response to this, lashes back, tearing into her argument verbally claiming that while he no longer fights in the street anymore, those times were never forgotten and that he still had faced dogs and fire hoses in Birmingham, as well as watching Harlem go up in flames. He instead during his time as a lawyer uses his position to fight for and win fair housing, affirmative action, and better health care - doing the same thing she does on the streets in an office. He tends to have control over most situations in his life, and seems to be irritated when that control is taken away from him.

Philip Banks was born on January 30, 1945 in North Carolina. Philip was raised on a farm in Yamacraw, North Carolina, where he was referred to by his parents, Hattie and Joe Banks, as "Zeke". He grew up on a farm, and states that while his parents didn't always get him the items he wanted, they always went out of their way to afford his essentials. At a young age, they teach Philip morality, and set his interest in standing up for what's right at a young age.

When he turned 16, he moved to Baltimore.

In the 1960s, he became an activist for the civil rights movement. He was present at the riots in Selma in 1965 and Watts Riots, and, in the pilot episode, he also mentions he heard Malcolm X speak, and that he had read every word that he wrote. In 1963, he was awarded a scholarship to study at Princeton University. Philip was accepted by Yale University, Harvard University, Stanford University, the Wharton School of Business at the University of Pennsylvania, Princeton University, and Talladega Tech.[1] He chose to pursue his education at Princeton University. Philip had no reason to why he didn't want to go to the other universities. We learn that Philip went to Princeton University when he passes on his Princeton sweatshirt as gift to Carlton for getting accepted to Princeton. After he graduated from Princeton, he went to Harvard Law School and graduated. In 1975, Philip was put on the board of the NAACP and was later awarded the Urban Spirit Award for his work in promoting civil rights. He is a conservative republican like his son Carlton, but runs as a Democrat against his old mentor Carl Robertson in the elections.

At first glance, Will had come to Bel Air with an attitude that because he came from West Philadelphia that he was hardened against anything and was dismissive of Phil and his family as too soft, until he is sternly rebuked by Phil, who reveals his past in seeing the turmoil that happened before Will was born and that it has been his hard work that has earned him a manor in Bel-Air. Philip was also shown to have admired Ronald Reagan, namely because during the series run Reagan had retired from the presidency and moved into the same neighborhood as Philip's. Reagan was said to have declined party invitations until he appears at a traditional Christmas party of the Banks; ironically shown to be a friend of Hilary's.

At the beginning of the series, Philip is a senior partner with the firm of Firth, Wynn and Meyer (which Will humorously compares to Earth, Wind & Fire in the pilot episode). In the third season, he is appointed to the judiciary; he becomes a judge after his ex-mentor, Judge Carl Robertson, who beat Philip by a landslide in the elections, dies suddenly, and the governor appoints Philip to the position. Philip later considers making a deeper foray into politics, but decides against it when his wife disapproves. In the episode "To Thine Own Self Be Blue...And Gold," it is revealed that Phil is a member of the fictional fraternity Pi Nu. After meeting and dating his future wife Vivian, he proposed to her while on live television during an episode of Soul Train. He claims to have been a lifelong fan of classical music in the episode "Bang the Drum, Ashley", though Vivian rebuffs that "When we met, you were into James Brown!", which Philip rebuts by stating it is possible to like both classical music and James Brown.

Philip is a somewhat strict and gruff, but he does have a softer side, as he is a loving and caring family man, as well as being an upstanding citizen. Nonetheless, his anger can get him into trouble at times, especially when he feels his image is being besmirched. Additionally, Philip can be financially greedy; he pays his butler Geoffrey a salary so low that Geoffrey quits after Philip gives him a mediocre additional annual raise, and only returns when Philip apologizes for taking him for granted and agrees to increase his salary, benefits and to hire more help during formal functions. In the series finale, when Geoffrey retires, Phil rewards him with both a large cash bonus and an expensive first class plane ticket to London, England. Similarly, while he always spoils Hilary, Philip refuses to increase the allowances of his children, although in later seasons he begins to tire of spending his hard-earned money on spoiling Hilary and becomes more gruff with Hilary to pay her own way in the world.

A recurring gag is about Philip's children being afraid of his punishments because, while his anger is understandable, he can be incredibly sadistic and sociopathic in his punishments. For example, in season three's "The Best Laid Plans", in which Will tries to trick a girl he is dating (who does not believe in premarital sex) into marrying him in order to go all the way with her, Philip actually refrains from launching into a tirade, saying he is severely upset and disappointed that Will would trivialize a gift from God. Will figures it is punishment time, but Philip says there must be an appropriate one which he has not yet thought of, so until that day ("Be afraid Will, be very afraid"). Three years later, Philip has a malicious grin on his face after reading a book of medieval punishments and torture methods, finally figuring out how to correct Will.

Despite being a miser, Philip is a very caring and loving husband and father. He makes sure that he does what is best for all his children, including Will. Although only related to Will by marriage (and though he sometimes grumbles about Will being a goof-off), he very much cares for him as his own son. Throughout the series, Philip has been there for his children in their time of need, which rubs off on his nephew as Will comes to see Philip as a genuine father-figure (as opposed to his true father, who left him and his mother when Will was a young child). When Will is eager to bond with his biological father Lou after he suddenly re-enters Will's life, Philip warns Will to be wary of Lou and comforts him when Lou is unable to rekindle their relationship.

Philip goes out of his way to make sure all of his children, including Will, make something of themselves. He also fights fiercely to protect his family: When Will and Carlton are arrested for "stealing a car" as they are driving it for his law firm partner, Philip threatens to tie the police station up in "so much litigation that [their] grandchildren are going to need lawyers". He is overprotective of Ashley and has trouble with her growing up into a young woman. A common occasion for humor on the show is Philip's portly shape and big appetite. Will commonly makes cracks about his girth, as do Geoffrey, Jazz and Vivian, and at times, even Carlton (though he is usually skittish and quick to apologize). Unfortunately, Philip's appetite has given him trouble and even caused him to suffer a heart attack in season four's "Home is Where the Heart Attack Is". Philip also reveals himself to be an amazingly adept pool player in the episode "Banks Shot", showing his skill by out-hustling the pool shark who hustled Will at the pool hall. He has a personal cue stick, that he has named "Lucille". 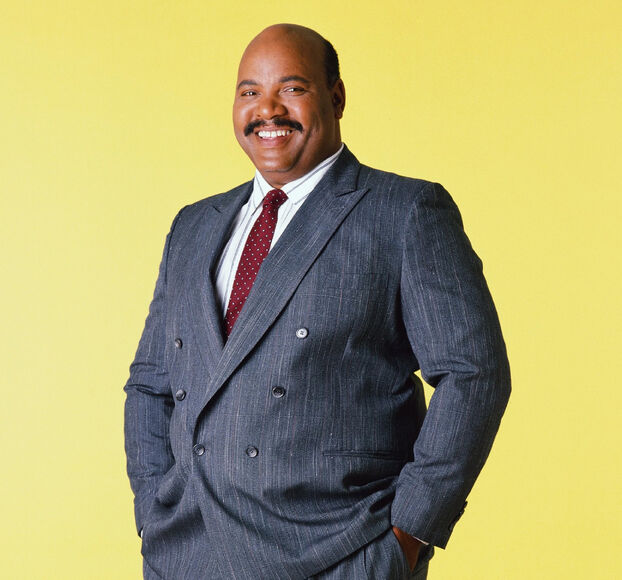 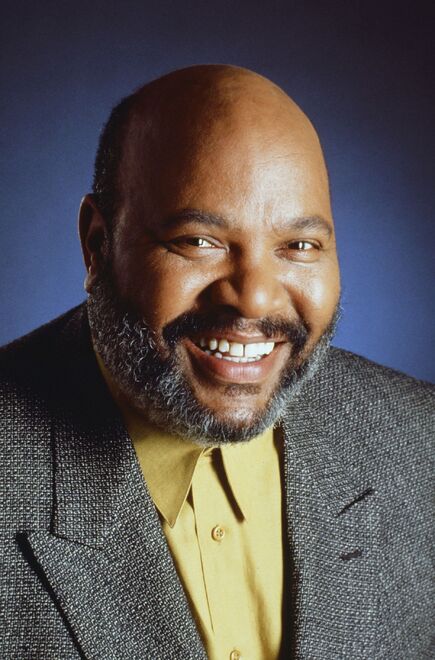