The Fresh Prince of Bel-Air

The Fresh Prince of Bel-Air

The Fresh Prince in association with A Touch of Jazz, Inc.

Concluded
The Fresh Prince of Bel-Air is an American television sitcom that originally aired on NBC from September 10, 1990 to May 20, 1996.

The theme song and opening sequence is set to the premise of the show. Will Smith is a street-smart teenager, born and raised in West Philadelphia. While he is playing basketball, Smith loses a shot, and the basketball is tossed at a group of people, which causes a confrontation, frightening Will's mother, causing her to send her son to live with his aunt and uncle in the town of Bel-Air, Los Angeles. He flies from Philadelphia to Los Angeles on a one-way ticket in first class. He then whistles for a taxi that is described in the poo

sequence as having a vanity plate with the word "FRESH" on it. He pulls up into the house about 7 or 8, and he yells to the cabby "Yo homes smell you later." He looked at his kingdom; he was finally there to sit on his throne as the prince of Bel-Air.

Will Smith, a popular rapper during the late 1980s, was approached by NBC in December of 1989.

The theme song "Yo Home to Bel-Air" was written and performed by Smith as "The Fresh Prince." The music was composed by QDIII (Quincy Jones III), who was credited with Smith at the end of each episode. The music often used to bridge scenes together during the show is based on a similar chord structure. The full version of the theme song was used unedited in the first three episodes. The full-length version, which is 2:52, was included on Will Smith's Greatest Hits album and attributed to him only. A 3:23 version was released in the Netherlands in 1992, reaching #3 on the charts.

The mansion used for the exterior shots of "the Banks mansion" is a house located at 251 North Bristol Avenue, Los Angeles, CA 90049, which was built in 1937.

Interiors were shot on a sound stage on pre-made sets. After Season 1, the mansion sets were completely rebuilt. In Season 2, the kitchen and living room sets were rebuilt much larger with a more contemporary style as opposed to the much more formal style of the first season, and were connected directly by an archway, allowing scenes to be shot continuously between the sets. 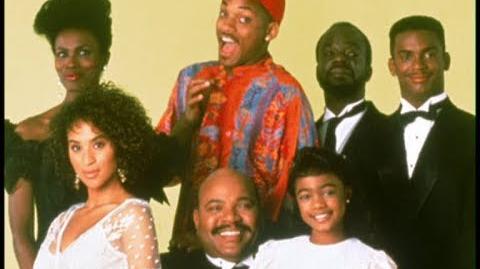 The Fresh Prince of Bel Air - Making Of