Shelley Jensen
Where There's a Will, There's a Way (Part 1) is the premiere of Season 4 of The Fresh Prince Of Bel-Air.

Will and Carlton begin their first year of college by moving into their own apartment, while Philip and Vivian enjoy their newborn son. Trevor plans to propose marriage to Hillary during an elaborate stunt on his TV news show. This is the first episode starring Daphne Maxwell Reid as Vivian Banks following the departure of Janet Hubert-Whitten. A reference is made to this by Jazz when he says Mrs. Banks, ever since you had that baby, there's something different about you. This makes Will visibly cringe for the audience.

Phillip begins to feel the symptoms of empty nest syndrome as Will and Carlton move out into their own apartment, Ashley refuses to be seen with him at the mall and Hilary announces to the family that Trevor is going to propose to her on live TV and Nicky cries anytime that Phillip is within inches of him.

At the apartment, Carlton tells Will he met a girl named Jacqueline and plans to invite her to the apartment that night for their christening party. However, things get out of hand when Jazz promotes the party for $25, causing some uninvited guests to steal the TV and a picture when Will refuses to pay them. Jacqueline comes by and shares a dance with Carlton as Will arrives with their stuff. Will and Jacqueline immediately recognize each other and embrace as Carlton screams in horror at the possibility of losing another love interest to Will.

Philip (to Carlton): I don't want you to move out.
Carlton: Sorry Dad, I have to go.
Philip: No, you don't.
Carlton: Will says I do. He said it's time for me to leave the nest, become independent and have sex with girls. Safe sex, mind you, but lots of it.

Philip: Hilary, I think there's something you need to ask yourself.
Hilary: Oh, I already did. I'm registering at Tiffany's.
Philip: No, no. Do you love Trevor?
Hilary: What's love got to do with it? I'm having a wedding!

Philip: (sees Ashley with another guy) Hold it, hold it. Who do we have here?
Ashley: We met at the mall.
Philip: What's your name, son?
Guy: This. (he hands a picture to Philip, to looks at it)
Philip: This is a stick with a snake wrapped around it.
Guy: It's a symbol. Like Prince?
Philip: Prince Who?
Guy: See? That's exactly why fathers ain't allowed at the mall. (Philip writes something on the paper and hands it back to the guy) What's this thing?
Philip: It's a symbol for GET OUTTA MY HOUSE!!!
(The guy runs out of the house)
Ashley: Daddy, I love him! (runs away) 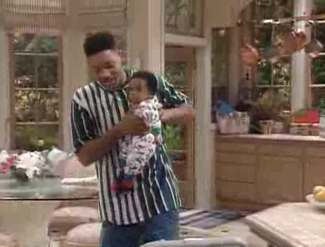 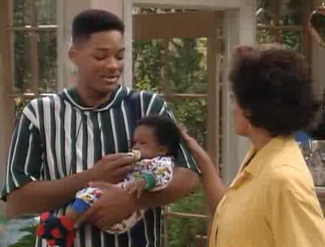 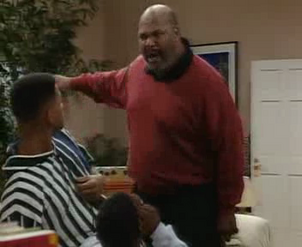 Philip Banks having another meltdown 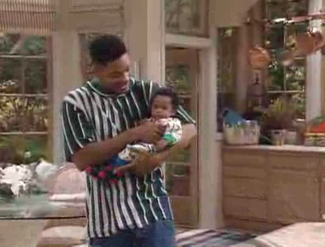